If David Letterman ever asked fishermen to rank their Top 10 aggravations, getting snagged would make the top of everyone’s short list.
Avoid hang-ups completely? Not likely. Truth is most species stay close to cover much of the time, and you must be willing to get snagged once in a while to go after them. Sadly, most people don’t. They shy away from the weeds or the wood or the rocks just to keep from breaking off. Sadder still, they often go home fishless as a result.
As Wisconsin guide and tackle manufacturer Greg Bohn notes, “Most people say, Look at those trees over there. Stay away from there! Well, I go there. I’ve been at a lake where there were only two trees lying in the water in the whole place, and I’ve pulled a limit of walleyes from each one.”
Limit your frustration with the right choice of tackle for the job. Here’s how.

Jigging in weeds and wood

A guide for 25 years, Bohn noticed years ago his clients spooked walleyes from cover before they ever had a chance to catch them. Using the standard jigs then available on the market, they would cast into the midst of weeds or brush, get snagged and then try to rip free. Bye, bye walleye.
It didn’t take long for Bohn to learn jigs with the nylon-fiber guards or Y-guards weren’t the answer either. He’d sometimes get 20 or 30 strikes to boat just two or three fish. Snag-free also meant fish-free too often.
Bohn and wife Audrey went to work to design a jig that would get through thick cover and catch fish, too. The result was the Timber Jig series.
The Timber Jig and the Deluxe Timber Jig both feature 7-strand wire guards that prevent most hang-ups while being flexible enough to let the business end of the hook do its job. The wire guard can be adjusted upward to increase the hook protection or bent downward to fish in lighter cover or to help snare light-biters.
“I don’t know of a deadlier jig on the market,” said Bohn. “It will literally go through anything.”
It’s standard ball-style jig head will literally bump off weeds and roll over obstructions. The jig’s value was proven one summer when Bohn and his clients fished a clear Wisconsin flowage in the middle of heavy weeds where fish had retreated. Bohn and company returned with limits 37 straight days while other guides struggled with standard jigs that spooked fish.
“Everyone thought I had a secret lake,” Bohn laughed. “I had 11 guides follow me on a single day to see what I was up to.”
The Deluxe Timber Jig is for rock or heavy wood like fallen timber, brush piles, fish cribs or beaver cuttings. It’s shaped like a piece of M&M candy, and the hook eye is on the front. It will crawl over anything. To prove its snag-free qualities to non-believers, Bohn has been known to cast one into the wood – not the stuff in the water, the heavy brush on shore. It’s design means the hook stays on upright away from bottom snags when cast.
Both the Timber Jig and the Deluxe Timber Jig come in sizes of 1/32nd, 1/16th and 1/8th of an ounce. Bohn explained heavier jigs tend to hang up from their weight alone. But, despite the Timber Jigs small size, they carry big hooks. Even the smallest one sports a size #6 Aberdeen. That’s large enough for Bohn to take a 12-pound, 10-ounce walleye using a Deluxe Timber Jig under a slip float in a stump field. A client once caught a 15-pounder on a similar set-up.
The lighter jig also has another advantage, it lets a fish engulf the hook along with the bait, whether leech, minnow or crawler. The light Aberdeen-style hook can be bent free if a snag does happen.
Add color with a Fuzzy Grub body. Fishing educator Spence Petros cuts off the front one-third portion of the plastic and glues it in place.
Even with the right “tool,” Bohn must train his clients to sense the difference between a fish bite and a hang-up. Walleyes sometimes merely take the bait on hold onto it. Instead of setting the hook immediately, Bohn advice is to dip the rod tip downward to give the line some slack. A 10-second wait should be enough to see if line movement signals fish-on. If a snag, merely shake it free and keep retrieving.

Bohn also manufactures a Timber Hook that sports the 7-strand wire hook guard. It comes in sizes #8, #6 and #4 to cover the gamut of live bait from crappie-sized minnows to jumbo leeches. The hooks also sport two-tone colors, including chartreuse/orange, chartreuse/green, chartreuse and pink glow. They are perfect for slip-float fishing in heavy wood and live-bait rigging along weed or timber edges.
But, as Bohn notes, “A no-snag rig is only as good as the whole package.”
The Timber Hook moves through heavy cover, but until recently, standard live-bait weights paired with it would get hung up. Enter the No Snagg Sinker, new from Lindy Little Joe.

Name says it all

A futuristic-looking snagless sinker hit the market this spring that lets you boldly go where no sinker as gone before.
It’s a tackle breakthrough that may cause fishing educators to abandon the adage, “If you aren’t getting snagged, you aren’t fishing where the fish live.” Timber, rock, weed beds, even oyster beds and coral reefs – the No Snagg Sinker reaches fish in places previously labeled “unfishable.”
The No Snagg Sinker is the brainchild of innovator Ron Lindner. It’s the culmination of a 30-year promise he made to Nick Adams, the outgoing president of Lindy Little Joe, who long ago predicted the need to go one step beyond the Lindy rig. True, the Lindy rig is still the best method to serve up live bait on smooth, snag-free bottoms. But, leave it at home when fishing in rocks and wood. That’s precisely where the No Snagg shines. A slight banana-looking bend causes it to twist free of obstructions.
After Lindner built prototypes, he kept some for himself to test off the saltwater coast and freshwater lakes near his winter home in Florida. The others he passed to brother Al to try in the northern reaches of walleye and smallmouth country.
When they took No Snagg to the water, they shared a singleness of purpose – to get hung up. But, they soon found themselves fishing with the same sinker several 100-fish days later. It didn’t matter whether they targeted red fish and snook in oyster beds or catfish amid river-borne stump fields or largemouth bass in weeds and rocks or walleyes and smallies in natural-lake timber. If hang-ups happened, they were on the hook, not the sinker. (They didn’t try it with the Timber Hook, a combination we think that you’ll find deadly.)
The No Snagg can be fished like a Lindy Sinker or a Carolina rig. It can be used as a slip sinker or fixed. Leader length varies, but 18 inches is average.
Use it while anchored. Drift it. Troll it. Anything a bottom bouncer can do, No Snagg can do, often better. Where jigs may get hung up in a rocky crevice, the long, thin shape of No-Snagg drops a bait right down inside. Come out snag-free often with a fish that thought it was safe in heavy cover.
Petros sees an application for fall smallmouth and walleyes on rocky humps in deep water. The No Snagg not only will take a lip-hooked minnow down, it acts as a depth finder as well. Use a heavy version like the }- or 1-ounce and start high on the structure dragging it slowly ever deeper. Be alert to sense the subtle changes of just a few inches that can make all the difference. Once you find a ledge so narrow that even your sonar could not detect it, hook the minnow through the back so it swims upward and away from snags on the bottom. When you feel a strike, dip the rod tip slightly and set the hook fast.
Fishing in thick short grass for crappies or bass? Petros uses a No Snagg Sinker, Lindy snell floats and a brush hook on a long leader to put the bait just above the fish.
Heaven may be have snag-free lakes filled with big fish. But, until we get there to find out, snags can’t be eliminated entirely. Still, the right choice of tackle can help.

Early-season weed walleyes are not exclusive to America’s Northwoods. Fishermen in the nation’s Southland find spring walleyes roaming highland reservoirs over beds of moss, a kind of water hyacinth, said John Holstine, founder of the Arkansas Walleye Association.
Early in the year, Wyoming anglers round up walleyes in flooded sage brush and buffalo grass on the edges of reservoirs, added Scott Golden, a westerner and founder of the popular Web site Walleye Central.
In Arkansas, canyon-type, clear-water lakes like Ouachita host moss that blankets mid-lake humps normally found on channel edges. Holstine said some of the humps top out just below the surface. Vegetation covers the humps and flats adjacent to them down to depths of 18- to 46 feet.
Favorite tactics include running spinner rigs and nightcrawlers on bottom bouncers along weed edges. A second approach is to troll those same spinners over weed tops. Depending on the desired depth, use their own weight, a lead sinker pinched on the line or snap weights to take them down. Separate them using planer boards. Some trollers use crankbaits instead.
On calm days, it’s hard to tell Arkansas walleye fishermen from bass anglers. Both are equally successful casting crankbaits along natural pathways in the weeds. Lures swim back to the boat in the channels imitating forage. Gamefish lay in ambush along the weed edges and pounce as the bait passes by.
Golden said Wyoming fishermen target the “picnic-table bite” at that same time of year. Spring rains and snow melt push reservoirs to high levels. Water submerges spots where families will eat dinner by the Fourth of July. But, early in the year, walleyes utilize those same areas and others where weeds grow in 5- to 10-feet of water. Vegetation may top out just 2 feet below the surface. Golden runs crankbaits or spinners just over weed tops and edges. Fishermen also troll along the “stair-step” drop offs on the shore caused by water action as the reservoir levels fluctuates over the course of the year.
Both patterns may produce through June. By July, irrigation needs draw water down from shoreline vegetation on Western reservoirs, and walleyes move to classic structure. In the South, walleyes often stay in the weeds feasting on newly-hatched bluegills and minnows until the arrival of summer when they move to deeper water.

The VEG-E-JIG features a slender profile that allows the jig to slice through weeds and maintain contact with the bottom. It also features a Gamakatsu premium hook, making the jig ideal for live or artificial bait. The jig features an adjustable weed guard to allow snag-free fishing in a variety of conditions. According to Ted Takasaki, president of Lindy Little Joe, The VEG-E-JIG is designed to catch fish, not snags.

For more information on the VEG-E-JIG or other Lindy Little Joe products, call 218-829-1714 or visit www.lindylittlejoe.com. 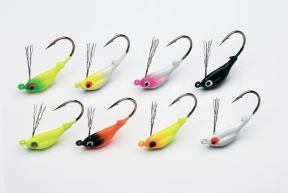 Known as a leading freshwater tackle company, Lindy Little Joe, Inc. is credited with developing many of the freshwater lures and methods that dominate the industry today. The company also offers a complete line of market-leading terminal fishing tackle: NO-SNAGG sinkers, jigs, rigs, floats and accessories including name brands such as Lindy Little Joe, Thill and System Tackle.